Summary: Healthy carb-loading, appropriate pace, no ice during the race.

Follow @ironconsult
The world’s favourite run” is over. Great North Run 2016 was enormous – and thanks to the spectators, it was also full of positive energy and definitely a race that every runner should do at least once to be able to feel & soak up this incredible atmosphere. Even though the finisher medals were pretty underwhelming – that’s how they compare to the ones from Reading: 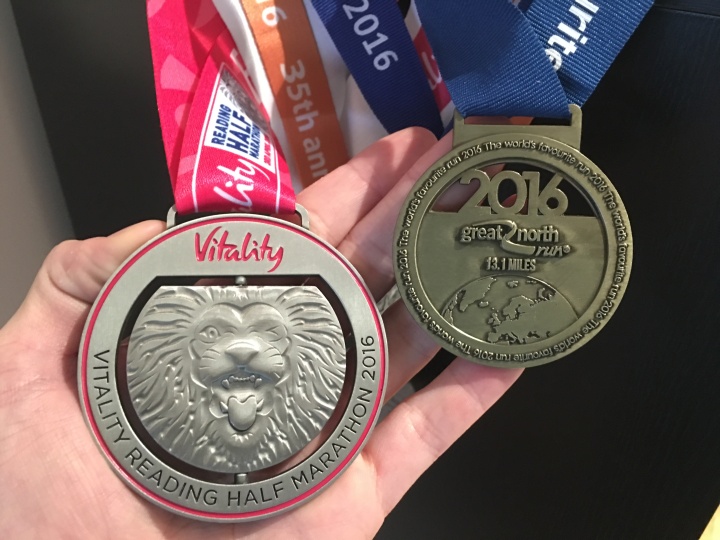 I was training hard for the GNR – my goal was 1:39:xx. My PB was from June’s Swansea Half Marathon , where I achieved 1:44:47 and this time I felt that I could do a lot better than that. Unfortunately, through my three main mistakes (I had no idea about one of them) I failed to get sub 1:40h and finished with a new PB of 1:42:22.

I thought that it might be worth sharing my mistakes – they might be no-brainers, but read about them anyway to refresh your memory and ensure that you DEFINITELY don’t do them. I suffered, so that you won’t have to suffer if you keep these three things in mind:

Before the GNR, I did Reading, Hackney and Swansea half marathons. All of them were on a Sunday and I followed pretty much the same eating (carb-loading) routine for them, i.e. increase carbs’ intake from Wednesday, pizza on Friday evening and then a mix of healthy (e.g. porridge, potatoes, rice) and unhealthy (crisps, Haribo’s, chocolate) food on Saturday. I’m aware that this was far from perfect, however I didn’t feel as if it impacted my performance thus far. Well, I think that at the GNR it did. My body was clearly sending me signals that I was heavily overindulging and that I will be regretting it very soon. I didn’t listen to it seriously enough.

2. Don’t start too quickly + get to know the route beforehand

If you ever ran in a race with 5,000+ people, you would know the excitement that comes with it (at least in my case). Similar-minded people around you, spectators cheering you on, bands along the route, high-fives with the kids – it’s all incredibly positive, energetic and motivating. If you’re not careful, you might do what I did at the GNR – veer off your planned pace into the “way too quick” territory. 50,000 runners, thousands of spectators – it really moved me, I’m not going to lie. This resulted in my pulse rising to 170 BPM within the first few kilometres of the race (in comparison, in June in Swansea it reached these levels after the 15th km) and I had to work really hard on getting it down and keeping it under control. On top of that, the hills at the GNR surprised me – I saw the profile of the route and I didn’t really think too much about it. It was the most hilly race so far for me and my lack of knowledge of the elevation could’ve impacted my performance (I was prepared for hills, although it would’ve been nice that so many of them were coming).

3. DO NOT EAT ICE IN ANY FORM DURING THE RACE

There I was, running, doing my best, carb-loaded up to my ears with a mixture of crap and clean food, trying to keep my pulse down and sticking to the planned pace at the same time. And I was on track to achieving the planned sub-1:40h. I remembered from my first HM in Reading that one kid gave me an ice lolly similar to these ones:

And I LOVED it. It was warm-ish outside, I was struggling back then and this was probably one of the best things from that race. So at the GNR, where the temperature was a lot higher, I was almost looking out for these bad-boys, wanting to get my hands on them during the run. I had 1.5 of them, the first one probably around the 8th km, the second one on the 12th km.

Well, I will not be having them EVER AGAIN during a run. On the 15th km a sharp, unbearable pain appeared first on the left hand-side of my ribs and then on the right-hand side. I almost couldn’t breathe, struggled for a few minutes and ended up stopping for a few seconds. The rest of the race was me running like the hunchback of Notre Dame, which didn’t help with my final time, but that was the only way for me to continue running – straightening up was excruciating.

After the run I told my trainer about the pain – which I thought was just a very nasty stitch – and he immediately asked what I ate before the race and during it. I shamefully admitted to carb-loading with some crap food and mentioned the ice lolly during the race. Thinking back to Reading – it was the beginning of April, so the temperature wasn’t that high. I was running at a pace of 5’25/km, which was pretty quick for me back then, but not to the point of increasing my heart rate too much. So when I had the ice lolly back then, nothing bad happened. But in the case of the GNR the sun was devastating and it was warm (not unbearably, but still), plus my pace was 4’42/km and I was working hard to achieve my goal. What I didn’t know is that by eating that damned ice lolly I caused my warmed up and fighting muscles to badly cramp up – I wasn’t aware that this could happen! But then again, I started running in January this year, so I still have a lot to learn. That ice lolly cost me my sub 1:40h. It’s a valuable lesson, also in humility!

So please, learn from my mistakes and:

Next race – Oxford Half Marathon on the 9th October. That’s where I’ll achieve my sub 1:40h, as I will be following my own advice! Hope you will too. See you then? 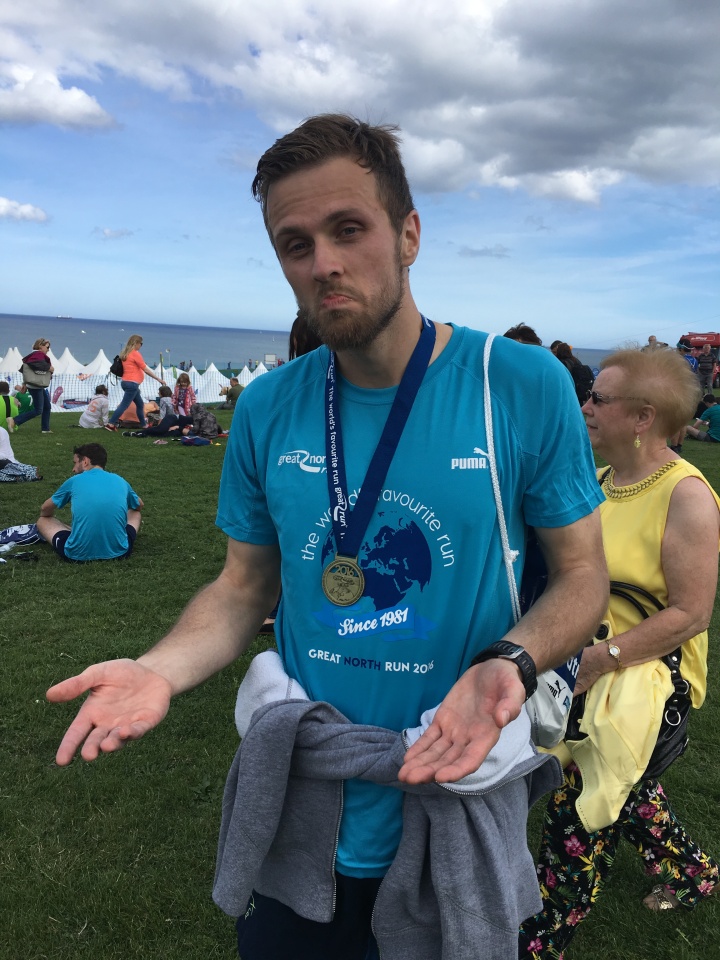 4 thoughts on “Learn from my mistakes – Great North Run”