Summary: In 1983, 61-year-old man named Cliff Young ran an 875 km ultramarathon from Sydney to Melbourne and won it, breaking the previous record by two days. Learn from his story – full of lessons for business and life in general – and be like Cliff Young!

Follow @ironconsult
875 km is a lot. That’s almost 550 miles. That’s the distance between Scotland and the south coast of the UK. It’s about 8750 football (soccer) pitches long. Finally, it’s the distance of the one of the toughest ultramarathons on our planet (at least when it was on, between 1983 and 1991) – a race between Sydney and Melbourne.

To be able to run such distance, you have to train for a number of years, have appropriate clothing, a support crew and ideally be young. That’s what people used to think – but then Cliff Young appeared at the start of the race in 1983 and signed up for it.

Cliff was not a professional runner. Sure, he did some training in the years before the event, but was nowhere near “prepared” as the athletes that ticked all of the boxes mentioned above. Oh, and he was 61 years old. Here’s Cliff, waving at you: 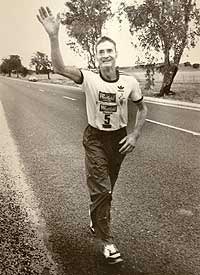 His main training consisted of rounding up 2,000 sheep on 2,000 acres of land when he was a young guy. He did it by foot and it took him 2-3 days. He wore gumboots. GUMBOOTS.

So when the 875 km ultramarathon started and Cliff – initially in his gumboots – began to “shuffle” (he wasn’t running like the other competitors), nobody believed that this man was going to go far.

But he kept on going.

The elite athletes had been taught that they should be running for 18 hours and then have 6 hours of sleep before continuing. Well, Cliff wasn’t an elite athlete and nobody had told him about this, so he just kept going, while the others slept. And slowly, but surely he took the lead and did not give it up until he reached Melbourne, as the unexpected victor, smashing the previous record for a distance like this by two days.

Cliff’s story is full of incredible lessons, applicable in business, sport and generally in life. For me, the most important are:

Let’s all be like Cliff Young and learn from his story. For me, especially lesson no. 1 gives me that internal calmness instead of a sense of regretting that I’m not a successful entrepreneur / billionaire yet.

What do you think? Which point is the most relevant to your situation? Let me know your thoughts.