I did it – last weekend, on Sunday the 23rd April, I became a triathlete. This is how it went down.

I’ve come up with the idea of becoming an IRONMAN by November 2018 in September 2016 and started training the three disciplines in November 2016. I have done the so-called “brick-sessions”, when you do a cycling training and then jump off your bike, put on your running shoes and off you go for a jog. I have never done a full triathlon before, though – I haven’t even ever gotten out of the water and immediately onto a bicycle, so The First Tri in Lydney was supposed to be my first time when I actually get to do all three disciplines together.

The plan / goals were simple:

Happy to say that all points can be ticked off with a “:-)”.

An evening before I improvised dividers in my bag to accommodate all three disciplines – it turns out the Skubb boxes from Ikea make for a decent impromptu holders! 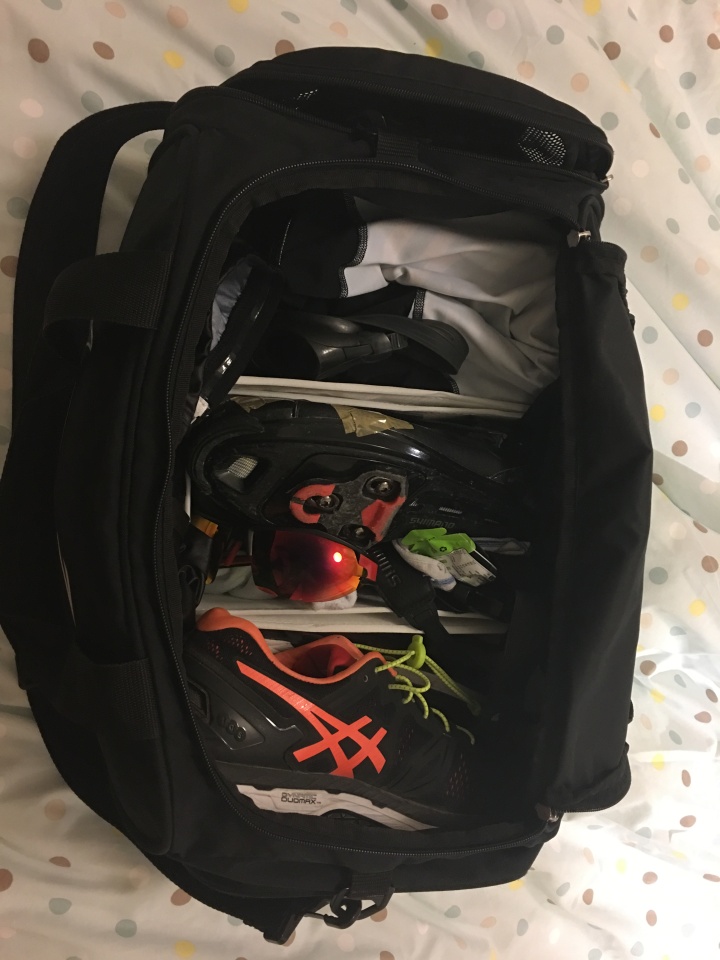 I also spent a lot of time on memorising information from the race brief – no drafting allowed, don’t take your bike off the rack until you’ve got your helmet on, shout “foot down” at the only T-junction on the route etc. Needless to say, I was pretty sure I will forget to do / not do something and will get disqualified. Apparently at IRONMAN events the list of dos and don’ts is a lot longer – great.

As it was a pool-based triathlon, athletes were starting in waves based on their estimated 400 m time. My wave started at 9:30 AM, so when I arrived at 8 AM, I had plenty of time to hang around, register and prepare for the race. Don’t let The First Tri’s website (http://www.trimaxevents.com/the-first-tri) fool you – it looks like it’s been put together by a 10-year old for a school project, but Trimaxevents turned out to be a professional organiser and I was positively surprised with how well everything was set up and coordinated. Apart from the air temperature, though, which oscillated around 10-12 degrees Celsius… Maybe next time, Trimaxevents, get your s**t together and heat up the air, would you?

I got my stickers and prepared the bike. 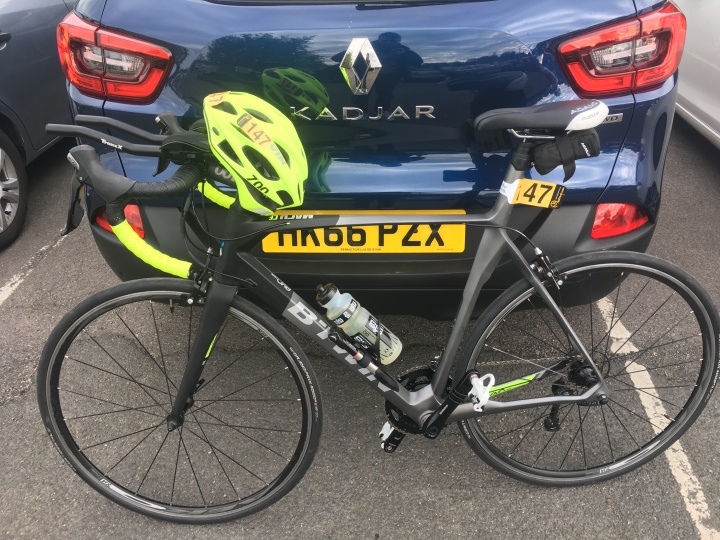 The next part was the racking of the bike. As I’ve never done it before, it was all about following the lead of the other triathletes. It turned out I had plenty of room to lay out my gear for the other disciplines and my improvised divided bag wasn’t of any use at all, besides from transporting the gear from the car to the racks. Lesson learned there.

At 9 AM it was time to put the tri-suit on and conduct a little warm-up – my right shoulder has been playing up a little bit sometimes during my swimming sessions, therefore it was critical to get it nice and warm. We got sensors to put around the ankle, special coloured swimming caps and got into the water. There were three of four people per lane, starting within 5 seconds of each other. I was the second to start on my lane and on the first length it quickly turned out that I was faster than the guy in front of me. As per the race brief, I tapped him on his foot and he complied by stopping at the end of the pool and letting me through. I have later been told (and by “later” I mean a week later) that I might have done the guy a favour, as after I had overtaken him, he most likely comfortably “drafted” behind me while I was doing all the hard work in front of him and getting the water out of the way. I guess that’s why drafting’s not allowed on a bike – I wonder if he did that on purpose or just got lucky!

Anyway, my coach and I agree that swimming is my weakest point – it’s not really a matter of speed (although that is a part of it as well), but a matter of endurance and keeping up a decent tempo without, well, dying. It takes a proper pace to get me to >170 BPM. In a swimming pool, I can be above 170 BPM within minutes of hard work, which can be seen nicely here:

I basically started and my heart rate went uphill and stayed there. Not surprisingly, at length #14 the guy behind me tapped me on my foot (as he’s been drafting comfortably behind me, preserving his energy) and I had to let him through for a quick finish. Anyway, length #16 came, I got to the end of the pool and came out of it like a whale – just rolled out, slightly light-headed and really tired – and that was just the first discipline, for crying out loud!

The brief said “no running until you’re outside”. Well, even when I got to outside, I wasn’t in the mood for running – the swim took a proper toll on me and just reiterated how much work there is to be done if I am to survive 3.8 km of an IRONMAN swim… Anyway, got to my spot and picked up a towel I bought just a day ago – which was a great decision, as the micro-fiber “Big Jim” soaked up the water immediately. As it was cold-ish outside, I had a jacket prepared to put on after the swim to not get pneumonia, but Big Jim did the job just fine and I decided to stick to just the tri-suit.

Another impromptu idea from the night before was putting brown packing tape on my bike shoes – during my brick sessions, my feet used to get really cold and the runs were somewhat unpleasant for the first few km. As the run during The First Tri was just a few km, I didn’t want to have that discomfort and needed to stop the wind. I’m happy to say that the tape worked a treat! 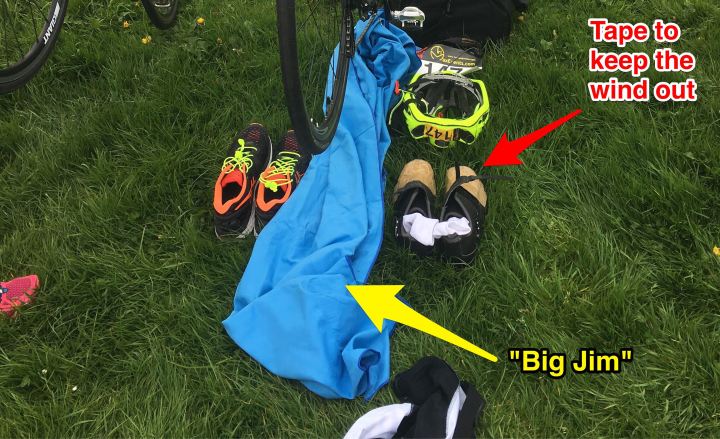 Shoes on, belt with the race number on, helmet and glasses on, bike off the rack and boom, it was time for the 22 km.

(I warned you it was going to be a long-ish post!)

I started really strong, overtaking quite a few athletes from different groups, averaging around 35 km/h and ploughing on. I’m not sure if that’s the standard when it comes to small races, but the roads weren’t closed, so it was just like a weekend ride on the country side, with cars passing you within a few centimetres of your bike. It wasn’t a surprise – I didn’t expect the roads to be closed, the entry fee was way too low to pay for that – but it added a little bit of danger to the mix.

The route was pleasant, there weren’t that many cars, the temperature turned out to be just fine and the kilometres were just passing by. Until the hills came. They looked more or less like this:

The “aaaaaaa” at the end was me going down a silly steep road at 65 km/h, not pedalling and just praying that a car won’t appear out of nowhere… The hills were nothing compared to e.g. the IRONMAN Wales route – so if I am to finish it next year (if we decide to choose this one), there’s a lot of hill work to do here!

Got back to the Lydney Leisure Centre, dismounted, put on my running shoes and in less than a minute I was out there, starting my 5.5 km. Another great purchase a few weeks before the race – elastic shoe laces. 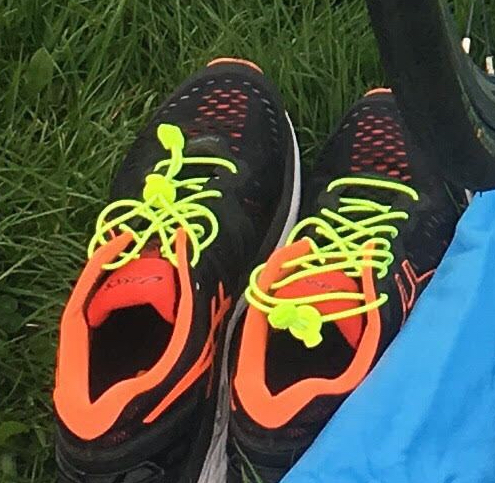 No fumbling around, trying to tie them up with cold fingers. Just feet in and off you go.

(You’re almost at the end of the post, well done and thanks! :))

My last measured 5k (a parkrun a few months ago) was just above 20 minutes. I’ve gotten faster since then and with the fatigue from the swim and the cycle, I was able to run at an acceptable pace of 4:15 min / km. Another big lesson here was nutrition – I know it was “only” a sprint, but because of that I didn’t do any carbloading whatsoever and my glycogen was depleted by the time I got to the run. I didn’t eat anything while on the bike, because my original race belt with a gel holder malfunctioned before the race and I had to buy one at registration that didn’t have the ability to carry any nutrition. I also didn’t stick a gel to the bike, so I ran out of T2 with a gel in my hand and sucked on it immediately to get some energy for the last minutes of the race. After 3 km my liver started to protest a little bit, giving me a clear signal, saying “dude, I’ve got nothing to work with here, feed me”. Big, big lesson for my next tri – eat or suffer! On top of that, there were no water / gel stations on route, so it was the survival of the most prepared.

Two laps done and I crossed the finish line. I was a true triathlete, officially! The announcer struggled massively with my name (no wonder, try pronouncing “Wojciech Busz” if you’ve never seen or heard it pronounced before), so I got a “well done Buzz” from him, a medal & a cup and that was it for the day.

The times were slightly below what I thought they would be – especially the bike leg, which was heavily affected by those three murderous hills:

But all in all, I was rather satisfied:

That’s it. Again, thanks for reading the whole thing – if you got to this sentence, you either did read it or scrolled through it and in both of those cases the effort is appreciated. Next event – an olympic distance on 4th June, with first proper open water swimming and checking whether I have learned my lessons from The First Tri!

Take care all and be awesome.