Summary: leave your phone, disconnect from the Internet and reconnect with people.

Just to catch you up – I’ve been travelling a lot recently (hence also the lack of posts) – I visited Wiesbaden, Frankfurt, Madrid, Lisbon and Philadelphia in the last four weeks and it’s been a blast. I ran in each of them, got incredibly lost in Madrid (ended up doing 25 km instead of 15 km), experienced the unforgiving hilliness of Lisbon and the grid of American streets in Philly. I was also ill for a week – some virus was tormenting me, causing a 7-day break in training – but am almost back to full health now, continuing the training and the journey to becoming an IRONMAN (which is still on track).

This post is about something I noticed & experienced during my trip to Germany and the US of A. As I’m saving up for a house and every penny goes towards that goal, I didn’t enable data roaming during any of the above mentioned trips – I was accompanied by other consultants on these two visits, though and that opened my eyes to a simple truth that we all know about, but sometimes forget how overwhelming it is: Internet can be an addiction. Hearing your phone buzzing and picking it up to check who commented on your new Facebook picture or what Donald J. Trump did this time has become an involuntary action. As with any involuntary actions, the first step to controlling it is becoming conscious of it. And particularly those two trips made me ultra-aware of the involuntary craving for being able to scroll through something on my phone.

I couldn’t, though – no WiFi, no data roaming, no text messages or Facebook updates, no news from BBC or the NYTimes, no tweets, nothing of these sorts. The only times I was able to check the social media or the news was in the evening and in the morning over breakfast. By the way, are you cringing a little bit while reading this? Are you imagining yourself in my situation and thinking “I wouldn’t be able to survive this”?

Anyway, I’m sure you’ve already guessed what happened: due to lack of WiFi / Internet connectivity, my connections with real people enhanced (surprise surprise!). In my job as a management consultant, you cannot overestimate the value of relationships with other people and this situation only reaffirmed the truth of it. In a few bullet points, these are my key takeaways:

I know all of these might be pretty trivial for you. They were eye-reopeners for me, though. ‘Re’-openers, as I knew this stuff already, but these past few weeks reminded me of how much of a prison can the ubiquitous access to Internet be, how negative impact it can have on productivity and human relations. So let me end with a picture from my favourite trilogy: 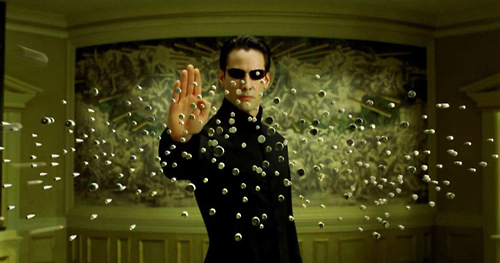 Be like Neo. Free your mind and learn how to stop the Internet connectivity bullets attacking you from every angle. I can’t go deeper than that.